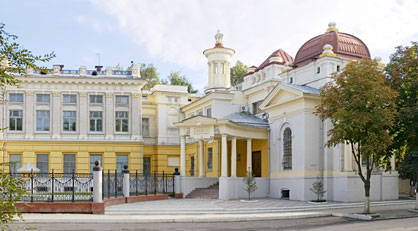 Saratov State Medical University is one of the oldest universities in Russia. It was founded in 1909. At that time Saratov State Medical University was organized as the only faculty of the University which was the 10th in Russia. The founder and the first Rector was Professor Vassily Razumovsky, an outstanding surgeon. He is considered to be the founder of a neurosurgery school in Russia.
In 1909, 93 students were admitted to the University. Only men were allowed to study. The education was paid.

In 1930 reorganization in the field of education in Russia was carried out and many independent Institutes were organized. The Medical Faculty of Saratov University became an independent Medical Institute. Three faculties were organized — Medical, Sanitary-Prophylactic (but it soon stopped its existence) and Care of Mother and Child (which was soon renamed as a Faculty of Pediatrics).

By 1935 the Institute had about l600 students. In 1939 one more faculty was founded — the Faculty of Training Military Physicians — specialists for Army service. But during the World War II it stopped functioning and resumed its work only in late fifties.

After the World War II many new Departments were opened — mainly for the Faculty of Pediatrics — Propedeutics of Pediatric Diseases, Internal Diseases and Surgery for pediatricians.

In 1961 one more faculty started its work. It was the Faculty of Postdipioma continuing education. It was meant for refresher training of specialists, as well as for interns, residents and postgraduates. Once in 3—5 years specialists should take the refresher courses.

The population of Saratov is about 1 mln. people, it lacked qualified dental service and in 1988 it was decided to open a Faculty of Dentistry.

So in the beginning of 90s Saratov Medical Institute had the following faculties — Faculty of Medicine, Faculty of Pediatrics, Faculty of Dentistry, Faculty of postdiploma education and that training military doctors. In 1993 the Institute was again renamed and got the original name of the University.

First foreign students appeared in 1991. The first batch consisted only of Indian students. Now 500 students from different foreign countries are studying at the University.

Since the year of its foundation the University follows the classic system of training medical students.